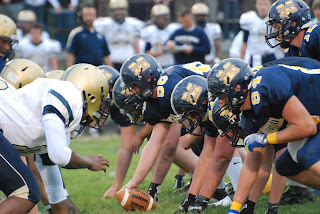 2013 Yearbook file photo
Football Preseason
by Baron Medsker
After a 1-9 season in 2012, the Pioneer Football team players have spent time working and getting better.
“We have lifted, constantly conditioned and practiced as hard as possible every single day,” senior Damien Mills said.
The varsity team opens up the season at home against Lebanon on Friday, August 23rd.
“We are very deep [at the receiver spot],” Assistant Coach Brian Nay said. “There are seven guys who could all step in and make plays.”
Homecoming is going to be against Decatur Central on Friday, September 20th.
“I feel that our entire team has improved physically, especially our team speed and strength, and [I’m] very excited to see our guys show off what they have been working on,” Varsity Coach Chad Dockery said.