Showing posts from May, 2020
Show all

Plants, Animals, and Farmers Oh My by Arionna Moore

How MHS Athletes are Handling Adversity by Kimmy Turley 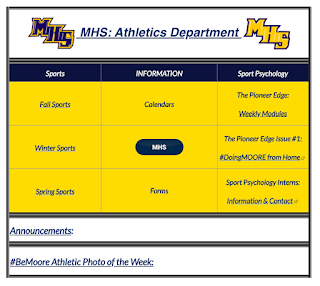 Since the student athletes at MHS are unable to have their daily workouts with Coach Ray, and they are unable to get into any gym at this time, Ray has been providing them with new ways to workout at home. He has been providing two workouts every day along with their daily Speed and Agility workout. One of those workouts is for students that have access to equipment at home, and the other workout is for students that do not have access to equipment.  “Providing two separate workouts for them and creating ways they can be innovative with resistance training has allowed them to make the most of their workouts at home,” Ray said.  The MHS Athletic Department has created a Canvas page during this time to provide all the athletes with workouts that are being posted by Ray. These workouts are being received by all student athletes through the Canvas page, and all of the coaches are receiving the workouts through their emails.  “In my opinion, the hardest thing for the athletes
Read more

Mr. Damron Had a Baby!! by Abbigail Price

An Inside Scoop on Lives During the Pandemic by Arionna Moore 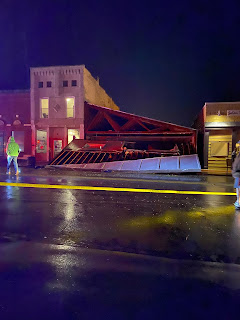 On Wednesday April 8, 2020, a major storm hit downtown Mooresville and caused serious damage. There were many trees that had fallen because of the wind and the tornado that had come through, and many businesses had lost parts of their buildings.      I had gone to downtown Mooresville about 20 minutes after the tornado had passed because my mom has her office right on the corner of Main Street. Thankfully, her office, Fairway Independent Mortgage Company, was one of the few that had received no damage from the storm; however, almost every building around hers had experienced building damage such as roofs being torn off or hit, windows being shattered, and even the fronts of some buildings had come off.     It has been almost a month since the disaster and between the firefighters, police officers, power companies, business owners, and the town of Mooresville, the town is being rejuvenated. The streets of downtown Mooresville had just opened back up on Saturday April 25, 2020 af
Read more
More posts