Showing posts from October, 2012
Show all

- October 31, 2012
by Brett Hoffman             This past Saturday, senior Michael Passmore ran in the Indiana State Championship in Terre Haute. He was the only Mooresville cross country runner to advance to state.             “I took it easy the week before the race and got mentally prepared,” Passmore said. “I also ate a ton of carbs.” This was Passmore’s second time running at state for cross country, and he was ready to show his competitors how much he had improved. Passmore was in between the fortieth and fiftieth at the 4k mark, and finished in seventeenth place, passing nearly half of his fellow runners in 1000 meters. Passmore also finished as the eleventh fastest senior in the race, which gave him a spot on the Indiana All Star Cross Country team. He will be running in Kettering Ohio with the other All Stars from Ohio, Michigan and Illinois on Nov. 17.             “I got a PR (personal record) at the most important race of the season,” Passmore said. “I am very happy.”             Th
Read more 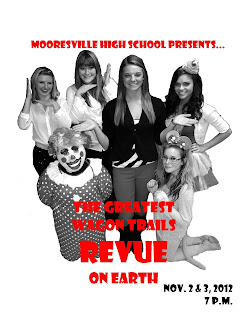 by Paige Baker   Mooresville High School will be hosting its annual Wagon Trails Revue on Friday, Nov 2 and Saturday, Nov 3 starting at 7 p.m. Cost of admission is $7, tickets can be purchased from Mrs. Dawn Blake at the Welcome Center anytime during the school day.    “Wagon Trails is a fun way for the yearbook staff to raise money. It really helps us out a lot with yearbook sales,” event coordinator Tara Davis said.
Read more

- October 29, 2012
Due to the PSAT being optional this year, unlike previous years, juniors and seniors must attend school on the day that sophomores will be taking the PSAT, Oct. 31. It happens to be on the same day as Halloween this year. Only sophomores and juniors who have signed up for the PSAT will be taking it on that day.
Read more 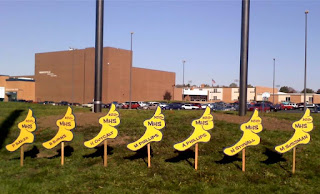 It was cool and clear the morning when the Girls’ Cross Country Team stepped onto the Regionals course at Greensburg. After finishing their final run-out, the girls lined up and readied themselves for the race ahead.
Read more

- October 25, 2012
by Brett Hoffman   As cross country season comes to an end, senior Michael Passmore has moved into the State competition level. After an incredible season filled with record breaking times, Passmore will compete at State this Saturday.
Read more 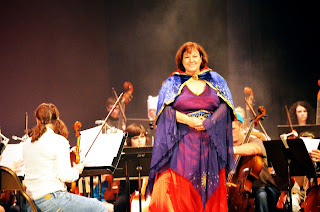 - October 24, 2012
The Art Club is hosting a pumpkin carving contest on Tuesday, Oct. 30 in Room 158. It will be held from 2:40 p.m. until 4:30 p.m. Anyone who is interested should see Mrs. Diane Evans. There is a fee of $2 and everyone must provide their own pumpkin. Some carving tools will be available but cutting tools will not be provided. All work must be done there and must be school appropriate. Prizes will be given to first, second and third place. The winning pumpkins will be displayed in the showcase near the art room. The more participants the bigger the cash prize, so sign up!
Read more

- October 24, 2012
Mooresville High School’s Student Council will be helping the Boys’ and Girls’ Club move into its new headquarters on Saturday, Oct. 27 from 9 a.m. until noon. The club needs more volunteers to come help out. The club is currently located on 217 East High Street in Mooresville (next to the Godfather’s pizza) and will be moving to the corner of St. Claire Street and Indianapolis Road. Vehicles that can load materials are wanted but not required to help. Meet at High Street location. If you have any questions or to RSVP, contact Jennifer Carroll at (812) 369-9158.
Read more

Athlete of the Week

- October 22, 2012
NEWS RELEASE: FROM MHS ATHLETIC DEPARTMENT   Week of October 8-13 & 15-20, 2012 EDWARD JONES - MOORESVILLE ATHLETICS ATHLETE OF THE WEEK   FEMALE ATHLETE OF THE WEEK: GIRLS CROSS COUNTRY:  Freshman, Megan Phillips Megan finished 9th at the IHSAA Regional meet in Greensburg, IN.  She put forth a great effort, and broke the school record for the third time this season.  She first broke the record in mid-September running the 5k race in 20:06.  One week later, she improved the record, running 20:02.  At regionals, she started strong, and crossed the finish line in 19:46, re-breaking the school record by another 16 seconds.  Megan is a great encourager and has led her teammates to their strongest performance of the season, earning a trip to compete in the IHSAA Semi-State meet this past weekend.   MALE ATHLETE OF THE WEEK: FOOTBALL: Senior, Bram Wood Bram had a solid performance in the 31-12 victory over Franklin County on Oct. 12 th .  Bram recorded 7
Read more 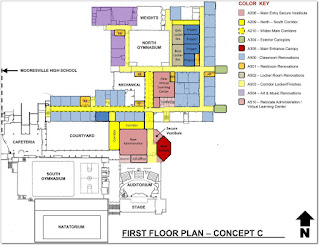 Possible Renovation: MHS Received audits and renovation concepts from three companies. This one is from the Skillman Corp. and it includes features which may or may not be included in the final project. by Morgan Sussman    The Pulse staff recently had the opportunity to travel around the school with upper level administrators and a board member to look over the possibilities of renovations made to MHS.    The school board passed a resolution Tuesday to get a $20 million bond. With this money, the school corporation is prepared to start a large-scale high school renovation project, without affecting community taxes.    “We have right now in our community a growing homeless population, a growing free and reduced lunch number, people losing their homes, losing their jobs. And the last thing we need to do is raise taxes,” school board president Dr. Bill Roberson said. “So we’re not going to do that.”    This renovation is estimated to take place over 15 to 18 months spanning
Read more

- October 11, 2012
What the Pulse staff thinks needs changed at MHS    With the possibilities of renovations to MHS upon us, many students will be thinking of the things that they want changed.    The Pulse staff recently discussed what they thought should be changed in the high school. With the plans to cut down the size of the courtyard being considered, students will worry that they will not have any space to eat outside. Getting fresh air during the day is important, so a new area to eat outside would be nice.
Read more

- October 10, 2012
Mooresville Pioneers have Strong Showing at Cross Country Sectional Pioneer Girls Cross Country Team Advances to Regional Michael Passmore Earns Sectional Champion & Advances to Regional   The Mooresville boys & girls cross country team competed yesterday in the IHSAA sectional race at Franklin Community H.S.  Michael Passmore was named the individual sectional champion by placing first in the boys race.  He will be competing in the regional race in Greensburg on Saturday this upcoming weekend.  The boys team overall wrapped up their season with an 8th place finish in the sectional.     The girls team competed extremely well and had two runners place in the top 15.  They were Megan Phillips (8th) and Amelia Phillips (15th).  The girls team placed 4th overall and earned the honor to compete in the regional race at Greensburg on Saturday.  Congratulations to Coach Adam Hook and both cross country teams on their performance at the sectional cross countr
Read more

- October 08, 2012
by Daniel Skora Red Ribbon Week is the longest running drug prevention program in the United States. Each year it is celebrated on the last full week of October. This year it will be celebrated from October 20-28. Students Against Destructive Decisions(SADD) will be raising awareness of drugs on the week of Oct. 22-26. A poster will be available in the cafeteria to be signed by students who are against drugs from Oct. 22-24. They will also be hosting a game show during lunch. More information will be released the week of the events.
Read more

Athlete of the Week News Release

- October 08, 2012
NEWS RELEASE: MHS ATHLETIC DEPARTMENT Week of October 1-6, 2012 EDWARD JONES - MOORESVILLE ATHLETICS ATHLETE OF THE WEEK FEMALE ATHLETE OF THE WEEK: GIRLS CROSS COUNTRY:  Freshman, Megan Phillips This past week Megan finished runner up at the Morgan County meet held at Eminence.  Shortly after the first mile during the race due to course conditions Megan lost one of her shoes.  Megan showed great composure and determination by running the remainder of the race with only one shoe.  Her efforts help led the team to an overall victory earning the girls cross country program the Morgan County Championship! MALE ATHLETE OF THE WEEK: BOYS CROSS COUNTRY: Senior, Michael Passmore Michael was the individual county champion at the Morgan County meet this past week for the 2 nd consecutive year.   It was a very wet course, but Michael won the race by over one minute ahead of the nearest competitor.  Michael has showed great leadership throughout the year and he continues
Read more 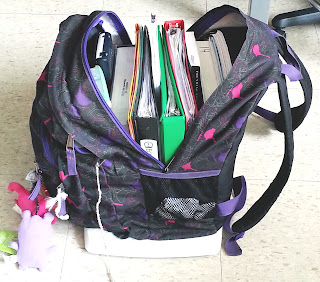 by Taylor Childs   Body ache after a long school day?   How much weight does a typical student strap to their back during the week? The average student carries a book bag that weighs 17 pounds.    MHS Pulse staff weighed 20 backpacks to find the average weight. The heaviest book bag on record was 27.8 pounds, while the lightest was 7.6 pounds.
Read more

- October 04, 2012
NEWS RELEASE: FROM WAGON TRAILS YEARBOOK STAFF CONGRATULATIONS Wagon Trails Revue 2012 SOLO ACTS Thanks to all who auditioned for Wagon Trails Revue. Listed below are the acts which will perform.
Read more

- October 03, 2012
by Daniel Skora             Wagon Trails Revue auditions will be on Thursday, October 4 after school from 2:45 to 4:30 p.m. Please bring the appropriate materials and wear the appropriate attire for your audition. Be ready to answer questions during your audition. You must also know the original composer or writer of your performance. Performances must be no longer than four minutes each. The set up for your audition should be minimal. Only one song from each genre will be chosen. If you are auditioning in a group, all members must be present for the audition and meet the academic requirements. Sign up outside Door #121 for an audition time.
Read more

- October 01, 2012
Week of September 24-29, 2012 EDWARD JONES - MOORESVILLE ATHLETICS ATHLETE OF THE WEEK FEMALE ATHLETE OF THE WEEK: VOLLEYBALL:  Senior, Grace White Grace was a key contributor this past week in Lady Pioneer wins against Cascade, Danville and Clay City.  She is a passionate individual who has given 100% throughout the year in practice and game competition. This week Grace's enthusiasm and positive attitude were a driving force behind the success achieved by the team.  Grace has demonstrated leadership and a competitive drive that has inspired her teammates all season. MALE ATHLETE OF THE WEEK: BOYS TENNIS: Senior, Clay Huddleston
Read more