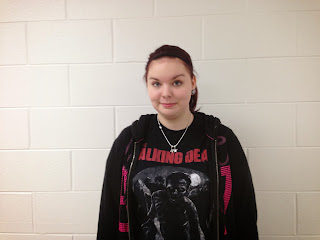 by Mariah Towery
“Dashing through the snow, in a one-horse open sleigh, o’er the fields we go, laughing all the way,”  Amanda Whitehouse sings on the bus heading to the Indiana Repertory Theatre.
The 44 passenger bus carries two English 9 honors classes to see A Christmas Carol performed live. The classes have studied the play for about a week and now they the chance to see it performed for them. The trip takes about thirty minutes and the classes are already late. When they arrive the show is just beginning. The teachers quietly usher the students into the theatre’s doors.
The students are lead by theatre staff through the exquisite lobby and up the stairs to the balcony level.  The students squeeze through two small doors and tip-toe to their seats so they do not disturb the rest of the audience. Once in their seats on the balcony, the quiet students watch the sparkling snowy stage dim and actors appeared on stage.
A woman in old victorian garments moves to the center stage, “ During the performance please keep all cellphones and cameras put away. We will be performing a version of the well known play, A Christmas Carol. We hope you enjoy the show.”
She slips off stage, the light changes and snow starts to fall onto the stage. Several more characters appear onto the stage and they start to perform a song.
Selena Snapp leans over and whispers, “They look beautiful in their dresses.”
She stares in awe at the scenes that pass on the stage. Dancers twirl in circles around the stage, the full student audience watches mesmerized by the talent of the actors. The way the scenes fall into place as the student pull the play that they read together with the actors’ performances like connecting the constellations.
Everything fits to how they thought it would be and it becomes more. The actors brought each character to life with their charisma,talent and their lines. The actors’ words swirl through the air into the audience's ears tantalizing their imaginations.
“ The way they perform their roles makes sense for each one of their characters,” Michael Frink comments in the middle of play. “It’s as though they were born to become the character and how they embrace the character is perfect.”