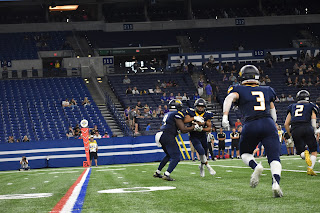 Quarterback Nick Patterson hands the ball off to Gideon Brimmage. Patterson started on Varsity as a sophomore and is starting this year as a junior as well. “The field at Lucas Oil was a lot bigger and it gave me the sense of being on TV,” Patterson said. 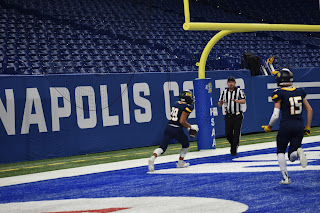 Senior Gideon Brimmage runs the ball into the endzone for a touchdown. Brimmage scored 2 out of the 5 touchdowns MHS had against the tigers. “I realized how badly I wanted to be back on Lucas Oil in November for the state championship,” Brimmage said. 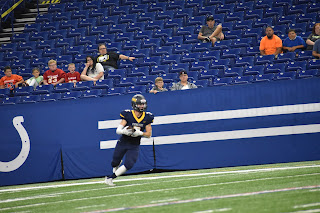 Wide Receiver John Clampitt catches the ball thrown to him by quarterback Nick Patterson and runs toward the end zone. Clampitt is a senior on the team and has been playing since grade school. “This was my first game at Lucas Oil and it was cool to experience that with my teammates,” Clampitt said. 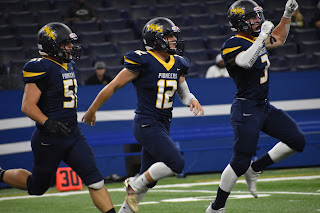 Maxwell Fishel, Brady Johnson, and John Clampitt run out onto Lucas Oil field for the season’s first game. The MHS played against the Lebanon Tigers on August 20th for the Horseshoe Classic. “It was mind-blowing to be on Lucas Oil Field, it’s where all the great played," Brady Johnson said Sophomore Levi Dorn holds onto the ball as Lebanon’s defense attempts to bring him down. Dorn is the JV quarterback and was put in during the fourth quarter. Dorn had two completions during his time on the field. 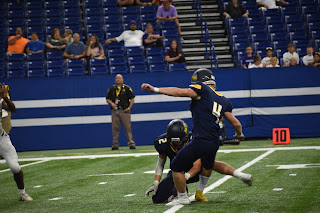 Senior Brain Houk attempts to kick an extra point after a touchdown. Houk is the kicker for the team and played mostly Varsity during his junior year. MHS won against Lebanon 35-7. 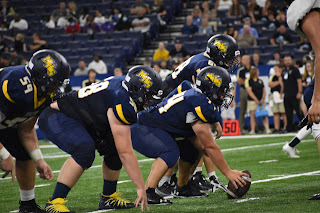 Mooresville’s offensive line starts on the scrimmage line. Chase Price, a junior, is an offensive lineman. “This was my first game starting on varsity, and I was just really excited,” Price said.