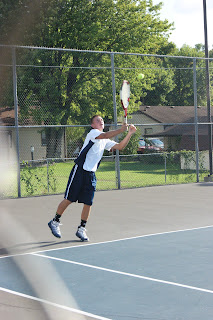 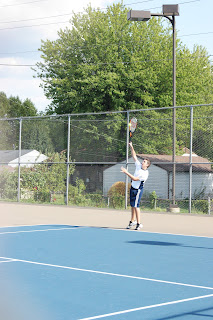 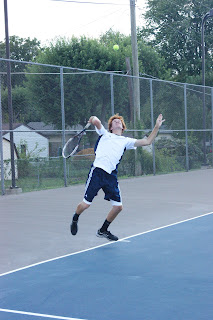 by Veronica Smith
This year’s 2012 boys’ tennis team has been practicing diligently for the upcoming season.
“I am trying to motivate his teammates and try his best to win sectionals this year,” senior Alec Hallgarth said.
The boys all have a goal they would each like to accomplish as one and as a team.
“This season I’m excited to have a good year with friends,” freshman KC Earls said.
“I plan to improve my tennis skills since it’s my first year playing tennis,” freshman Cameron Harris said.
“My number one goal for my team is for the three singles to go undefeated,” sophomore Chandler Gunnel said.
“My own individual goal for this season is to have a good time at the matches and just play to show good sportsmanship,” freshman Danny Watkinson said.
“From experience in the past Greenwood, Plainfield, and Bloomington North will be the biggest challenge to beat because there are good programs that their schools have and they’ve always been quite the competition,” sophomore Peyton Baker said.
Coach Teders is also excited for this season to see how some of the younger players will respond to good competition, and how the older players will lead the team.
“I am expecting us to be competitive in each match, work together, be leaders on and off the court, and to show great sportsmanship,” Coach Teders said.
The tennis team stays involved by doing team building activities like a corn hole tournament, a team cd/playlist, team dinners and other things as well.
“I like the fact that it is both an individual and team sport. If you work hard in the off-season not only can you be successfully individually, it will also benefit the team,” Coach Teders said.
The boys’ tennis team will play next at 5 p.m. September 5 away at Avon.