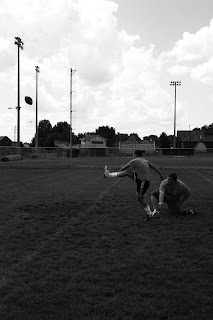 By: Abby Ellinghausen
This year at MHS the football team is giving a whole new meaning to the phrase “play like a girl” as sophomore Ashley Kimble joins the team as a kicker.
“I just wanted to try something new and see what it is like,” Kimble said.
Soccer has always been Ashley’s main sport so she thought it might be a good idea to take her kicking skills onto the football field. She is still a member of the girls’ varsity soccer team so she is very busy, but still manages to balance it all with school.
“It’s really tough. I go from school to football and then straight to soccer and it’s getting even tougher,” Kimble said.
Having had a girl on one of his teams in South Carolina, head football coach Chad Dockery wasn’t hesitant on letting her join the team.
“Yeah she’s a female, but she’s just as much a part of this team as anyone else,” Dockery said. He also added that there have been no problems with the boys accepting her and everyone has been very supportive. According to Ashley her teammates thought it was weird at first, but as soon as they realized she was serious about it they warmed up to her.

“Norton, Newkirk, Moore, McCreary, and Minardo have shown me a lot of respect, plus coach just told me that he wasn’t going to hold me any lower than the guys which just gets me really pumped up,” Kimble said.
Being the only girl on the team Kimble was given her own room in the locker room to change in. She still has to wear the same uniform and pads as the guys, but that doesn’t stop her.
“They were really uncomfortable at first, but I got used to them really quickly,” Kimble said.
“At first we didn’t think that she was really going to go through with it, but now that she is, I think having a girl on the team sort of keeps everyone in check. You know, football is a game of toughness and this makes you realize that anyone can play. She’s tough and she can kick,” senior teammate Mac Norton said.
Kimble was very nervous going into the first game, but was happy to know that all of her friends and soccer teammates are very supportive.
“I’ve just told her to do her thing. She’s learned a lot and we are never going to put her in a situation where she will fail,” Dockery said.
“I think everyone will be surprised when they see that there is a girl on the team. I just hope I get my time to shine,” Kimble said.
Head to the next game to support Ashley as she hopes to get out there and kick the Pioneers to a victory on both the football and soccer fields.