Girls’ Golf is Under Par 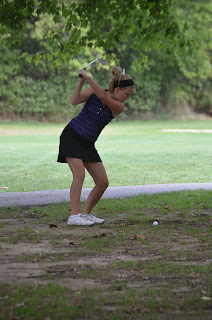 by Daniel Skora
Girls’ golf has finished off its season with a winning record. The 14 girls on the girls’ golf team worked hard to achieve this goal.
“Golf is important to me because it’s something me and most of my family do,” team captain Jourdan Blackburn said. “We can do it together and it makes us closer.”
They practiced from 3 until 4:30 p.m. every day. Their practice locations were Eagle Pines and Heartland.
“The best thing that has happened to me this year is having one of the best matches I’ve ever had. I shot a 46,” Blackburn said.
The team ended up with a winning record this year. They plan to have an even better season next year.
“I won our invitational at Eagle Pines Golf Club. I shot a 77 and the team came in second,” team captain Danielle Warthen said. “I enjoy playing and meeting the girls from other schools.”
Team captain Danielle Warthen placed second in the sectional on Saturday, and she will be moving on to regionals. This is her first year making it past sectionals.
“I played on West Chase which a tough course, so I’m glad I did so well.” Warthen said.
As a team they placed fifth at sectionals.